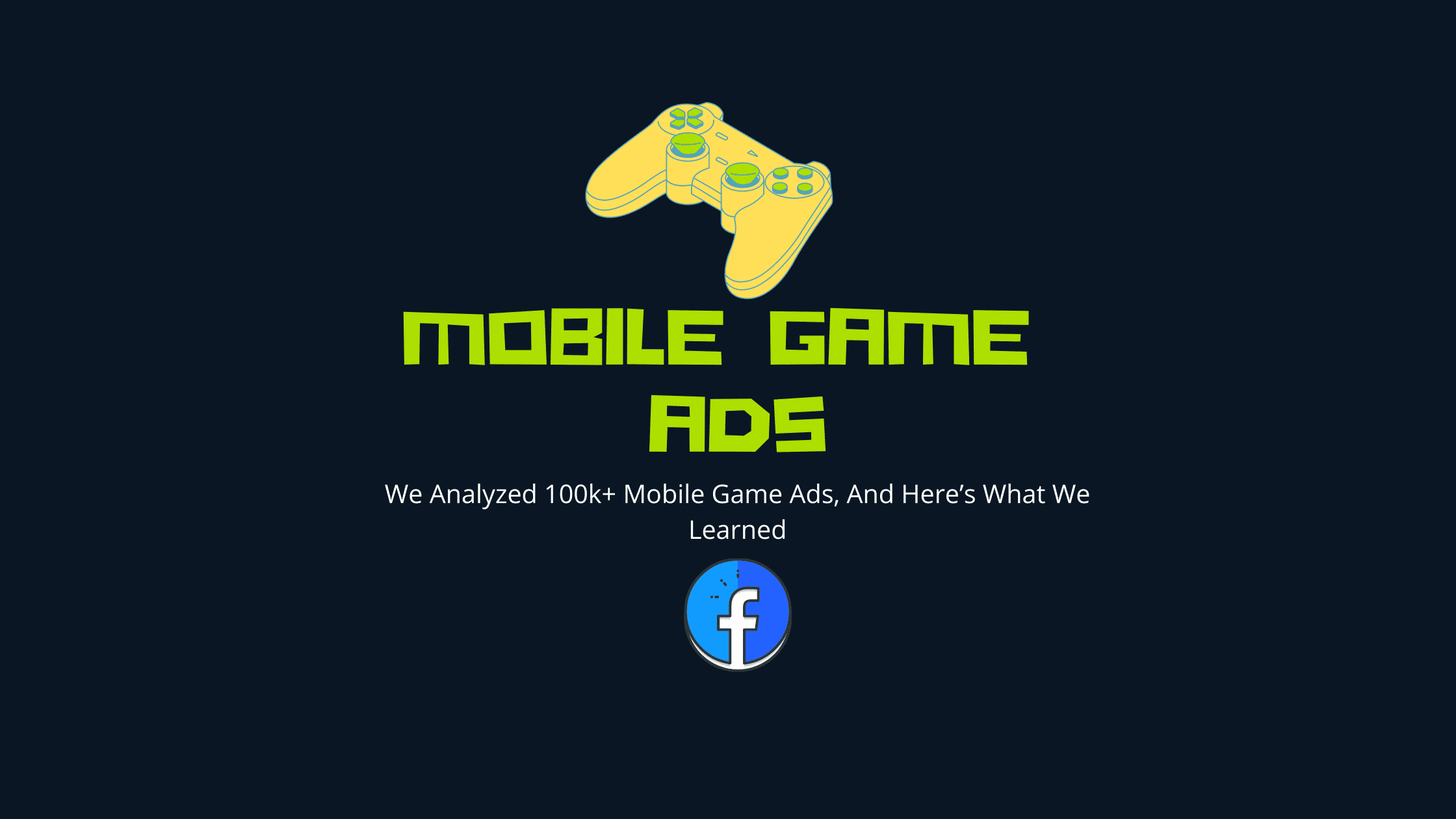 Facebook is one of the best tools for promoting your business online to a vast audience related to almost any niche.

According to some popular beliefs, the reach of Facebook mobile game ads has gone down.

Nevertheless, it's still one of the most popular social media sites with more than 1.7 billion daily active users (DAU).

According to a report by Statista, in February 2020, Facebook accounted for over 55.9 percent of all social media site visits in the United States, which is a clear proof of the importance of Facebook as an essential advertising tool.

Initially, it was easy to run winning campaigns on Facebook, but with time the competition among advertisers is increasing at a very rapid rate.

A good ad copy will be the first step to help you stand out from thousands of competitors. The better the ad copy, the more result-oriented the campaign is!

With the help of the industry's most powerful advertising intelligence tool SocialPeta that contains the data of over 770 million ad creatives from 69 publishing networks, we analyzed over 100,000 mobile game ads to see what works best on Facebook.

Let's dive into the details of our findings.

Although users are mostly attracted to Facebook ads based on their creatives, we can't neglect the value of titles and headlines. Why? Because they work!

According to our analysis, some of the words are mostly used in the titles of the ads.

One of the highly frequent words is "Free."

Advertisers use this word to attract the user's attention and to tell them that they can play this game for free.

Below is a screenshot of the details about a mobile game ad, which contains the first phrase with the word Free "Play the Rats for free on your Android device now…"

We can see that the game has got over 11M impressions and contains quite a high popularity score.

Words made with urgency such as Now, Hurry, quick, are also widely used because they induce a sense of urgency among users to download a game.

Similarly, some other words that induce users to click on an ad include Top, Best, Now, download, etc

Another important thing is a suitable length for the ad copy.

An excellent copy is when you can convert a user without writing paragraphs.

It's all about saying something without telling it wholly.

The length of the title should be appropriate and should be able to catch the user's attention in the first read.

If there is something to be added to the title or headline or whatever available space, the amount of space needs to be considered.

As in the below screenshot, we can see that the ad copy is not up to the mark, making the title lengthy, uninteresting and frustrating at the same time.

So, it's better to keep things comprehensive and catchy. 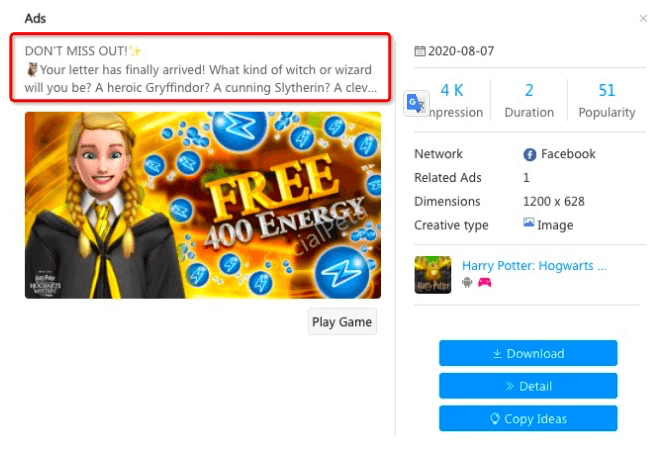 Ad creative is one of the most fundamental things when considering Facebook ads.

As Facebook ads are more about visuals and less about the text, so one can't neglect the value of the media that works here.

In order to comprehensively analyze the massive ad creatives on Facebook, we are going to use SocialPeta, the #1 Ad intelligence platform that contains the data of over 770M ad creatives.

It helps users in the in-depth analysis of advertising trends with the detailed graphical representation of the fluctuations in an organized manner.

As in this case study, we are specifically referring to mobile game ads, let's discuss the difference between these ad forms.

According to our analysis, video ads work best in the case of FB game ads.

As the video ads contain both the graphics and audio as well, so this combination helps in the better delivery of the message.

According to research, people remember and perform action much more quickly if it is a video ad.

We can see from the below screenshot that the advertiser is using a video ad to show gameplay with the call to actions as well.

It is observed that there are more chances to convert a call to action button if it's at the end of a video. 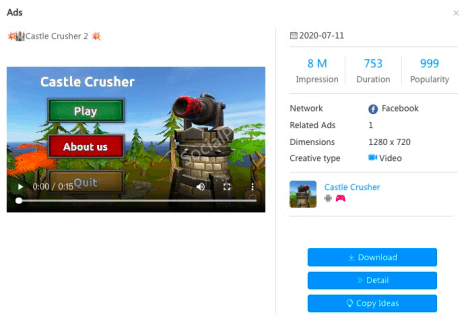 Moreover, video ads show a high click-through rate and are more likely to be shared by the viewers.

Also, a good gameplay capture can help in creating more curiosity among viewers.

Cleverly created images with minimum text convert better than those containing a lot of text-based information on them.

Image ads are popular because of the reason that they are easy to create, and one can try many times with different types of images to find which one converts better.

Video ads, on the other hand, are difficult to create and render.

However, once created perfectly, it doesn't matter it's a video ad or an image-based ad, the thing which matters is the conversion.

Thus, we can say that even though video ads are at the top of digital marketing, still image ads work great and can do wonders if used appropriately. 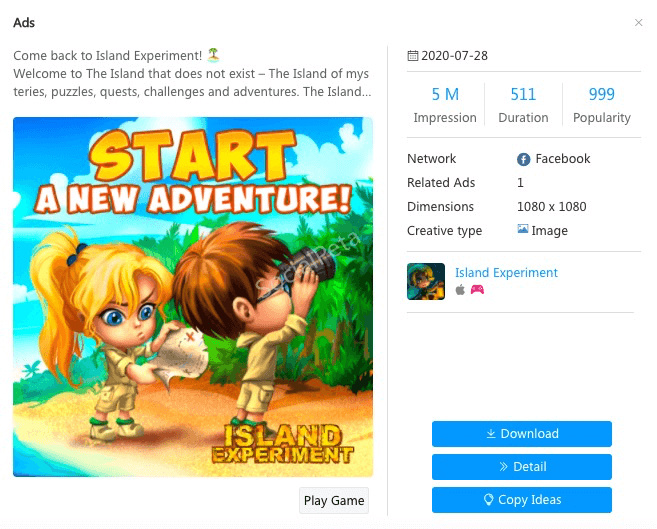 In the above screenshot from the dashboard of SocialPeta, we can see that the game "Island Experiment" is using a creative image with minimum text to get lots of impressions on Facebook.

Carousel ad is an interactive type of Facebook ad where users can add multiple (up to 10) pieces of media (images or videos) in a single ad.

These ads allow the advertisers to display multiple dimensions of a product in a single ad.

In the case of mobile game ads, different types of gameplay capture, screenshots or call to action buttons can be used.

Also, testimonials or user experiences can be shared in each card of the carousel.

Carousel ads are also one of the best types of ad formats that actually work because users prefer something moving and interactive instead of only static stuff. 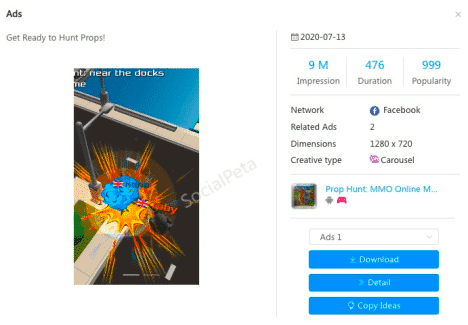 These are the type of ads where users can access the preview of an app or game while scrolling through Facebook.

These ads are more converting for the users based on the fact that users try the game a little before committing to download or buy.

This means that the playable ads give a good retention rate in comparison to other ads.

Facebook is continually adding new features to the playable ads to enhance the user experience. 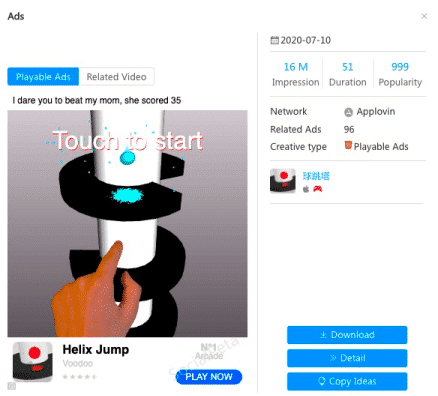 As we have discussed a lot about the types of ads that work on Facebook.

Now let's see how we can create an ad or a complete advertisement strategy that can help us in reaching the highest number of downloads.

One of the very first things that you need to keep in mind before starting a Facebook campaign is that you should understand your audience.

It's a fact that not everyone is the audience for a particular project.

An Olympic player may not be interested in a mobile video game.

On the other hand, there might be some person who is just waiting for a new casual game to try.

So, the first thing is to find the right audience for your targeting.

If you can find the right audience, you can surely get the right amount of conversions with good ROI.

It would be best if you also kept the demographic data like age, sex, interests, hobbies, gender, location and other similar characteristics into account before starting a campaign.

Facebook, undoubtedly is one of the most powerful digital marketing tools in the industry.

To maintain its position and to provide the best service to its users, it continually keeps making new improvements and introducing new features.

At a certain point, there are certain patterns that top advertisers in the industry adopt.

To keep pace with them, you also need to focus on those trends and patterns and follow them in order to get massive success like the industry leaders.

You might be thinking that it's not easy to find top competitors and follow their trends, but in today's world of Artificial intelligence and data science, it's no more difficult.

You can use advertising intelligence and spy tools like SocialPeta not only to find your potential competitors but also to follow them for keeping a track.

With the help of SocialPeta, you can access millions of ad creative and ad-copy ideas with a detailed analysis of the audience as well.

All you need is to see what your competitors are doing and replicate it creatively by adding your own colors.

After setting up the campaign, you need to perform testing for a better understanding of the audience.

You can either perform built-in A/B testing from Facebook or create different campaigns for testing the audience with a different angle.

The process will help you in learning about the rate of conversion with different types of ad-sets or campaigns.

You can then optimize your campaigns according to the highest conversions.

We hope that this article has helped you in learning some of the facts about Facebook ads, according to our case study on over a lac advertisement.

If you have any queries, please don't hesitate to ask in the comments section. 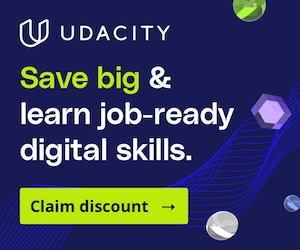